By Tamar Rabinowitz and Elizabeth Karcher

When the COVID-19 pandemic closed the President Woodrow Wilson House doors in the spring of 2020, we looked beyond the walls of our historic building for new ways to tell our story. With the 100th anniversary of the ratification of the 19th Amendment fast approaching, staff needed to quickly pivot the ways in which we explored themes in American women’s history during the Wilson presidency.

This unique project began with an outdoor Victory Garden exhibit in front of the Wilson House. This exhibition highlighted how the enthusiasm for gardening during the pandemic was rooted in a female-driven movement promoted by the Wilson administration to use the planting of home Victory Gardens as a way to support the World War I war effort.

We planted flags and signs alongside our own garden to illustrate how women’s work on the home front was critical to victory abroad. The display also showcased a history of the image of Columbia, the female symbol and personification of America, that was frequently used in posters to promote Victory Gardens during the war.

We soon realized that the Victory Garden flags recalled the protest signs suffragists held outside Wilson’s White House a century ago—prompting us to reimagine how we would tell the story of women’s suffrage during Wilson’s presidency. And so "Suffrage Outside"—an outdoor display of large, eye-catching flags—was born, celebrating those pioneering activists who captured the attention of a reluctant nation by taking the fight for suffrage outside.

View of the "Suffrage Outside" exhibition at the President Woodrow Wilson House.

"Suffrage Outside" illustrates how women’s work outside the home, their public protests outside in the streets, alliances with activists outside the United States, and the work of Black women kept outside the ‘mainstream’ middle-class white women’s movement, collectively propelled the American woman’s suffrage campaign to success in 1920.

"Suffrage Outside" is outdoors not just because it has to be, but because outside is where this story truly took place. And while we encourage visitors to this outdoor exhibition, we also acknowledge that not everyone is comfortable or able to come in person, and so we’ve decided to bring "Suffrage Outside," virtually, to you. 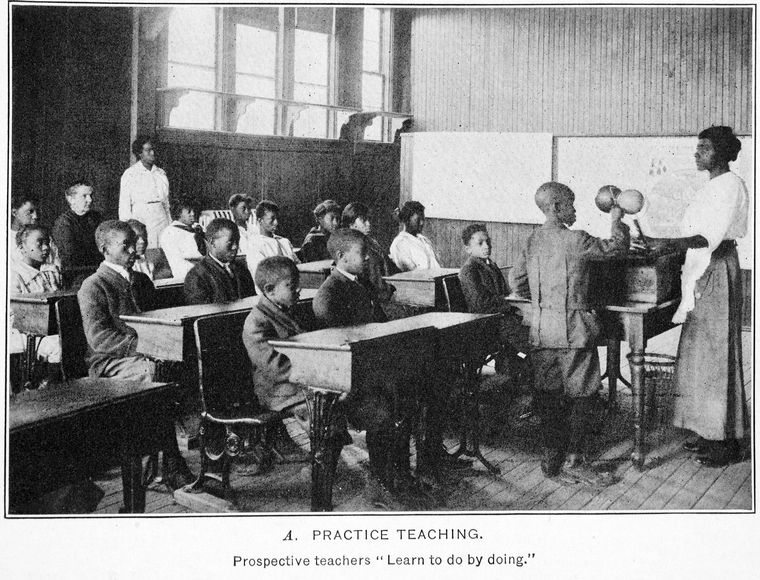 With expanding access to higher education, by 1910 women were nearly 80% of professional teachers in America. Black women, training at schools such as Spelman Seminary, which opened in 1881, made up just under 3% of the teaching force and faced discrimination in hiring and pay.

Working Outside the Home

In 1908, nearly five years before he was elected President, Woodrow Wilson wrote to a friend that “…women, whether by nature or circumstance, draw their conclusions about public affairs from logical reason, whereas safe and wise conclusions in such affairs can be drawn only from experience—experience of world—such as women have not had…”

Wilson’s assumptions reflected an outdated notion of gender roles which held that women belonged in the “private sphere” of the home while men were to dominate the “public sphere” of politics and work outside of it. The reality was far from ideal.

By the turn of the 20th century, women rapidly chipped away at these boundaries that, especially for immigrant and Black American women, had never truly existed in the first place. Growing numbers of women joined the workforce in factory workers, college-trained professionals, clerks, and Progressive-era social reformers. Since women were active participants in American public life, suffragists argued that women should have a vote in how America is governed.

From its founding in the mid-19th century, the suffrage movement was closely aligned with abolitionism and the fight for civil rights. Sojourner Truth, Harriet Tubman, and Frederick Douglass were among the most vocal suffrage activists in the 19th century. And yet, racism plagued the movement, forcing many of the most powerful voices to remain outside the ‘mainstream’ of white middle class suffrage organizations like the National Woman’s Suffrage Association (NAWSA) and the more "militant" National Woman’s Party (NWP). Discrimination pushed Black women suffragists to form The Alpha Suffrage Club in 1913.

Black suffragists fought for women’s right to vote as part of a broader battle for civil rights—bringing into sharp focus the intersection of racial and gender equality.

Even after the 19th Amendment passed, Black women in the American south continued to face the same violence and restrictions that prevented Black men from voting under Jim Crow.

Outside the White House

One of the most effective but controversial National Women’s Party (NWP) tactics was the 1917 picketing campaign outside the White House. Alice Paul, Lucy Burns, and the NWP directed their ire at Wilson and his refusal to support a constitutional amendment. Though Wilson had voted in support for suffrage in New Jersey in 1915, he continued to argue that states, and not the federal government, should decide whether to recognize women’s suffrage.

Many picketers were arrested and their harrowing experiences in prison—including force feedings during hunger strikes—were widely publicized, sparking outrage towards Wilson’s administration and garnering support for the suffrage. Even so, the president would not engage with the picketers, but their radicalism ultimately made negotiations with the more moderate Carrie Chapman Catt and the NAWSA more palatable to Wilson.

Composite of the flags in the "Suffrage Outside" exhibition that features the picketing campaign outside the Wilson White House in 1917.

Emmeline Pankhurst was a leading figure of the “militant” British suffrage movement and a close friend and mentor to Alice Paul. Pankhurst made multiple speaking tours across the United States on behalf of the suffrage cause, including this tour in 1911, drawing in crowds with her public soapbox lectures.

Outside, in the Streets

Suffrage activism in the 19th century was largely confined to lecture halls, lobbying, and printed materials. By the early 1910s, frustration over slow progress coupled with a new generation of leadership, led the movement outside—into the streets. Mass marches, soapbox lectures, canvassing, and picketing in front of the White House, accompanied by an aggressive media campaign, thrust the suffrage movement into the center of American politics.

Some of these new strategies caused a deep rift in the movement. Carrie Chapman Catt and NAWSA often viewed the flamboyant and “militant” displays of Alice Paul’s NWP as a threat to the movement’s respectability. In the end, however, these disruptive tactics often furthered the efforts of those working behind the scenes.

Mobilizing for War Outside the United States

From “militant” tactics to wartime mobilization, World War I accelerated changes already underway. Wartime mobilization made women’s work more visible and valued than ever before as they labored in munitions factories, worked as government clerks, campaigned for liberty bonds, and served as nurses. For the first time in U.S. history, women were official members of the armed forces. Though many suffragists were also pacifists, others viewed America’s entrance into World War I as an opportunity to assert women’s patriotism through their service, boosting arguments in support of women’s entitlement to the vote.

Women’s vital role in the war effort would profoundly enhance support for suffrage. Wilson, once opposed to a constitutional amendment, formalized his changed position on September 30, 1918, saying, “We have made partners of the women in this war; shall we admit them only to a partnership of suffering and sacrifice and toil and not to a partnership of privilege and right?”

The demands of a wartime economy opened new avenues of employment for women that would last long after the peace treaty was signed. With men on the front lines of the battlefields, women assumed positions as office clerks and secretaries. As Navy recruits, these women coordinated the national war effort.

The International Woman’s Suffrage Alliance first met in Washington, D.C., in 1902. This poster advertised the last meeting before the outbreak of WWI, held in Budapest.

Suffrage Outside the United States

Standing on Embassy Row, the Wilson House’s neighbors remind us that the battle for women’s suffrage stretched far beyond the borders of the United States. Suffrage activism abroad influenced the American movement at home.

Alice Paul, for instance, developed her tactical approach while campaigning with British suffragettes as a student in England. In 1904, leaders convened an international suffrage alliance, bringing together activists from across the globe to develop strategies and pressure governments to act.

The outbreak of a global war also shaped the suffrage movement at home. Suffragists declared that if America was to achieve its wartime mission of “Making the World Safe for Democracy,” it would have to live up to that promise at home by recognizing women’s right to vote, especially as more and more nations—including America’s wartime enemies—passed laws that enfranchised women.

Tamar Rabinowitz, Ph.D. is the manager of curatorial innovation at the National Trust for Historic Preservation. Elizabeth Karcher is the executive director, The President Woodrow Wilson House.