The President Woodrow Wilson House marks the centennial of the 19th amendment to the United States Constitution with the only curated alternative outdoor exhibit adapted for the COVID-19 era in Washington, DC

Now available as a Virtual Tour

The President Woodrow Wilson House's latest novel "Suffrage Outside!" exhibit takes history outside our museum and showcases how women’s work outside the home, the work and leadership of Black women pushed outside the ‘mainstream’ middle-class white women’s movement, protesting outside the White House, public protests outside in the streets, mobilization for war outside the United States as well as alliances with activists outside the United States, collectively  propelled the American woman’s suffrage campaign to victory in 1920.

The turn of the 20th century-however-served as a catalyst for the women's suffrage movement as their access to higher education expanded, World War I brought them outside the home into factories (typically the man's sphere), and the Progressive Era (1890-1920) began altering society's views about contemporary gender ideas. In fact, women's new roles in the industrial sector and their service in World War I prompted President Woodrow Wilson to exclaim in September of 1918, "This war could not have been fought [...] if it had not been for the services of these women." 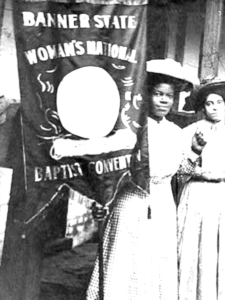 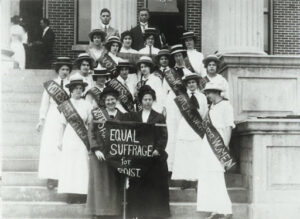 Women adopted a greater role in public life in the early 20th century, which reinvigorated the suffrage movement as it turned toward Washington to accelerate Congress' beleaguered progress to codifying women's right to vote in America. As they waved banners outside the Wilson White House to demand action on suffrage, we hoist banners today to honor their courage and enormous legacy.

We encourage you to BOOK A VIRTUAL TOUR to learn more about these heroines!

Resources on Teaching About Women's Suffrage

Delve into the Library of Congress' archives on women's suffrage primary source set.

Discover what is in the vault from PBS' women's suffrage collection.

Read about Suffrage Outside in the Washington Post or watch the television coverage on WUSA9 Morning Show and Voice of America TV (in Russian).